Migrating from Google Music to Navidrome on Kubernetes

When Google Music shut down this month, instead of taking the easy way out and migrating to Youtube Music I decided to have a stab at hosting my music collection myself. I think that it went pretty well so I thought I'd share the details.

Disclaimer: This is certainly not the most cost effective or simple way to solve this problem. It's suitable for the fairly niche intersection of people who have a personal Kubernetes cluster and are too stubborn to just give up and use Spotify.

Searching for an open source Google Music replacement, it didn't take too long to find Navidrome, a modern web based streaming server written in Golang.

I discovered that this family of music streaming software tend to support the Subsonic API which means that generally mobile and other apps are available for them and Just Work, which is pretty handy!

I have a Kubernetes cluster that I use for tinkering (because that's the sort of person I am!). It's mostly stable so it seemed sensible to put Navidrome there. Is this the simplest way to get this up and running? No. Is it a fun way to learn more about Kubernetes? Yes!

There isn't an existing Helm chart (a type of Kubernetes package) for Navidrome so I made my own (experimental) chart. Here's how to get that set up in your existing Kubernetes cluster.

The first thing you need to do is create a PersistentVolumeClaim where your music and Navidrome data files will go. Here's an example that I used to create a 250 GB volume on Digital Ocean (storageClassName will likely vary between cloud providers).

Once the PVC is created, we can install Navidrome and connect it up.

If this works, helm should output some values to for POD_NAME and CONTAINER_PORT that allows you run:

This should give you a running instance of Navidrome on http://localhost:8080, where you can set up an admin user and login (🎉): 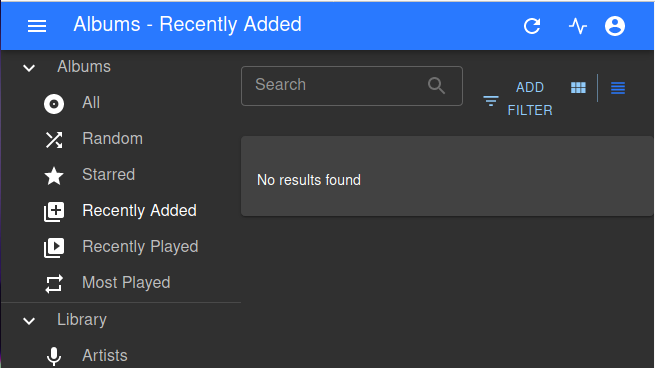 So this is great and everything, but we're still missing something quite important - the music!

I am assuming that you have managed to export your music and have it on disk under /home/your_user/Music.

This technique is a little hacky but for a one off it does the job and I was able to copy a large music collection easily in a day. What we're going to do is get the container to rsync the files from our machine.

This assumes you have an internet accessible SSH server (your_server) set up on the computer with the music collection.

Let's jump on a shell in our Navidrome pod:

Now, some set up. Here we get an SSH login working to your SSH server and then start copying the files:

This will sync music from /home/your_music/Music on the server your_user@your_server in to where Navidrome looks for music (🎉!).

Note: If you find that some music isn't showing up, you may need to "Rescan server" from the web UI.

Getting an entry point

So this is great - Navidrome is running and we can play our music from it! However, you may have noticed that our access currently depends upon the kubectl port-forward command above.

That might be enough for you but likely won't be that stable and it also will mean that you can't connect a mobile app to Navidrome.

This is where we need to set up an ingress. There are many other posts describing this set up so I won't get into that detail here.

However, I will show you how I wired my existing nginx ingress controller: 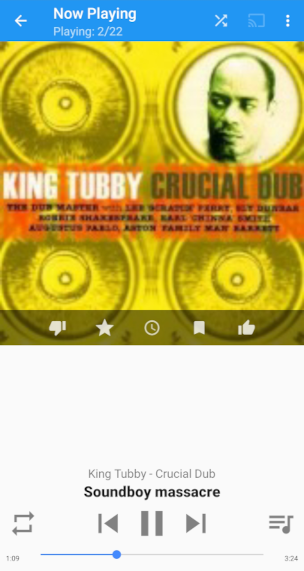 Here I'm using ingress to connect navidrome.mydomain.net to navidrome-1606039281. You can get the Service name by running helm list. With this set up - I'm able to connect an Android app to my Navidrome instance:

Note that the end point will be protected by the admin credentails that you setup, you'll likely want to consider setting up TLS on your ingress as well but I won't go into details of that here.

Was it worth it?

So I've been using this set up for a few weeks now and it works great, but was it worth it?

As I've mentioned, this lives on an existing Kubernetes cluster, but if I were to do this from scratch how much it would it be?

Prices are for Digital Ocean.

So that's $45 Navidrome on Kubernetes vs $0 Google Music. Not cheap!

The key thing to understand here is that I'm already paying for the Server and Load Balancer for other projects. Admittedly, in 2020 it still feels a bit steep to be paying $25/month for 250 GB but I can live with it.

This is a big win for me - I am on a slow, steady path to de-googlify myself and this is one step on that journey.

It's also great to use a music streaming server that is under active development and that I can contribute to.

I'm pretty happy with my set up and if you have similar niche interests I'd recommend giving it a go!